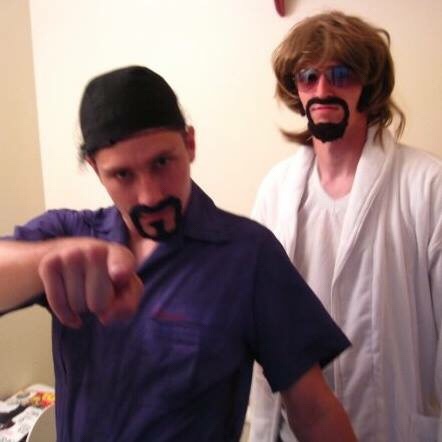 Tomorrow is the official 5-year anniversary date (because of time zones) that one of my closest military friends left this world. This guy was my wingman in basic training, my roommate at our first technical school, my bunkmate in Iraq, my drinking buddy and my tech support. This was the guy that helped me with moving, helped me fix things. This was the guy who’s wife I helped out whenever he was deployed. He was a good dude.

I remember that day so well. While I’ve come a long way since then, that day was my sledgehammer.

Holding Up My Wall

At this point, I was living with my girlfriend, now wife. I don’t know if it was because I felt like I had to protect them from some danger in the shadows or if the timing was just a coincidence, but everything shifted into high gear. I was ALWAYS anxious. I was exhausted any time I wasn’t at work. …the nightmares started. It might seem weird that a grown man is talking about the boogeyman in his dreams, but they felt so real, so intense. I would toss and turn (pretty normal), talk (still normal), yell and cuss (still kinda normal) scream and threaten (a little less normal), throw myself upwards and wake up out of breath (that’s not normal?), and sweat so much that I honestly thought that I had wet the bed (yeah, I said it).

In 2013, my family and I moved to California for a year for some training. The class that I was in took place in a building that was constantly under minor construction. Banging was sporadic and loud, and I jumped every time. When I did, I’d look around expecting that the other 5 people in the class had jumped too. They almost never did. Of course that made me look weird…or at least I thought it did. I kept it together. I slept a lot.

While I was in California, Richie was also stationed out there at a nearby base. He and his wife came to town so we could meet up and he could show her around our old school before his next deployment. We hit up a little Korean restaurant and talked for hours. Before we went our separate ways, we hugged it out and I told him the same thing I always told my friends before they “went out the door”. I said, “Keep your head down.” It never even occurred to me that it would be the last thing I would ever say to him.

Before dinner one night, I checked Facebook, because I’m a millennial. An Air Force aircraft had crashed in Afghanistan, four were confirmed dead. My heart sank hard. Nothing sat right. The secrecy, the crew size, it felt too close to home. I just knew it had to be somebody I knew.

Out of ALL of the people that crossed my mind, I never ONCE pieced together that it could have been him.

I texted another friend of ours who had changed his picture, “Please tell me that it is a coincidence that you changed your picture to Richie”. He confirmed that it wasn’t. Richie’s wife had notified another close friend of ours, a guy who was like Richie’s other, other half. The word was being spread to all of us.

I remember everything about the moment that the sledgehammer came out of nowhere and wrecked that crumbling wall that I was holding in my mind. I remember the rage, the shaking, the coughing, the shock, the doubling over…the floodgates. It couldn’t be true! No, it WASN’T true. There was just no way. Out of ALL of us that were a part of our social circle, our military family, HE was never the one that should have gone. I took the job to heart. I had enjoyed being good at the war-side of my career. I, or others like me at least, should have been on that plane in his place. He was the lovable goof ball. He was supposed to be make it. These are the thoughts that flood the mind of a man who feels a world of guilt for just being alive. That might not make any sense, but that was a feeling that crossed my mind…every…single…day. That feeling lasted for about 3 1/2 years. That feeling was intensified every year on April 26th, 27th, and 28th. That feeling was only numbed from taking annual leave for those three days so that I could drink in my basement for 72 hours.

My time in years of intensive therapy and classes have taught me that I could spend this day another way. I can use it to tell stories about this man that was a part of my life. I can reflect on his life. I can also cry a bit and be okay with that.

Last year, my older brother (I adopted him over many years) took the day off from work. We went fishing, watched the new Power Rangers movie that was in theaters (bite me I liked it), and bro hugged it out as we shared a tear or three. Thanks, Dirka!

This year, I am Peer Support. My job is to help those like me. I plan on continuing the new tradition of telling Richie stories to fellow veterans. I fully expect that I will cry at work. I’m okay with that. Hopefully, by doing these things, I can help my brothers and sisters-in-arms find their own path to remembrance and recovery.

Here is my shoutout to the person that has been there for every single step on this journey, my amazing wife. I love you, Bagel!

One thought on “The Sledgehammer…”